As the weather is changing it is almost time to be looking for the first of these little bulbs to put in an appearance in the garden. G. reginae olgae from the Meditteranean areas usually sends up its flowers in May and is followed by a succession of cultivars and species till late August.

It is possible to have plants flowering throughout winter. The plants are generally small and the flowers all look similar at first glance. Looking closely there are definite differences in size, shape and markings or lack there of.

Collecting these little bulbs tends to be addictive and there is a long history of skullduggery associated with collectors. Unfortunately the R.H.S. garden at Wisley has found it necessary not to label their collection in the ground due to the numbers stolen from there, how very sad that such a delightful little plant engenders such behaviour.

Galanthus are becoming more readily available now than has been the case. Many are only sold by specialist growers but there are plenty of good varieties that are easy to find and at a reasonable price. It is possible to buy bulbs in Canberra.

The conditions necessary to grow them are quite simple, good drainage is essential, an early morning sun position or dappled light is also important . Some species will take a sunnier position but most require shade. These bulbs grow very well in pots. A small quantity of bulb food after flowering is beneficial and once died down for the summer the bulbs should be in a position which gets a light watering on a regular basis to prevent the death of the bulbs from dessication. Under a deciduous tree for example. 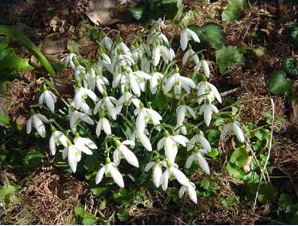 Once bulbs have been bought or have arrived by mail they should be planted immediately because of the risk of drying out, this is critical to success because who knows how long they have been out of the ground for whatever reason before they reach you. I certainly mean no disrespect to bulb suppliers on this score, most dried bulbs aren’t as sensitive to this as Galanthus.

Other small bulbs and ground covers mix very well with snowdrops, Cyclamen coum in particular flowers at the same time and the pink flowered variety looks wonderful with them as do the cyclamen now sold in punnets at the garden centres. I hope I have given a few ideas you may care to try sometime.

A few species and cultivars I would suggest are as follows but there are many more.

G. elwessii – the tallest growing species grows to about 25 cm and is very easy to grow and spreads well by seed and bulb increase. Many named cultivars are available and their names such as June July and August indicate when they are likely to flower. All are worth having in the garden.

G. plicatus and caucasicus – are other attractive European species fairly readily available and not difficult to establish.

G. woronii – comes from the old Soviet block and is the smallest snowdrop I have as yet grown, about 5cm tall and very delightful it is.

G. nivalis – the traditional snowdrop is quite small but lovely and is the one most prone to dying out in dry conditions. Some larger cultivars of this include Magnet and Sam Arnott. The double flore-plena is very attractive.

G. nivalis reginae olgae – mentioned earlier likes more sun than most and unlike other snowdrops flowers without its leaves in late autumn.

G.gracilis – differs in that it has quite twisted leaves, it is also a species for a sunnier position.

If you end up with the collecting bug specialist bulb growers are now listing new cultivars to keep one blissfully happy and empty of pocket….