A very useful and versatile family of shrubs and a couple of climbers, it is mainly deciduous in this climate. Height can vary from 50 cm in dwarf cultivars to the tall self-clinging climbers which once established can cover several metres. Flowering can take place from late October until well into March.

With the exception of roses and oleanders, hydrangeas are perhaps the only shrub to provide colour continuously through summer. Most hydrangeas in our gardens are cultivars of Hydrangea macrophylla. Flower colour of this species can be controlled in most older pink and blue cultivars by controlling the pH of the soil in which they grow. In general, most plants in Canberra will become pink if untreated. To maintain or introduce blue colouring add aluminium sulphate or blueing tonic or powder regularly from July to October and water well. It can take several years to obtain the desired effect and treatment must be continued if colour is to be maintained. Similarly, to maintain or intensify pink colouring add lime regularly to the area and use fertilisers high in phosphorus which will neutralise the aluminium and iron in the soil.

White flowers will not alter regardless of soil conditions, but will colour around the edges as flowers age on the bush. New red cultivars also will not change completely but can lose some intensity in acid soil.

The macrophyllas are very good cut flowers, but for best results cut them with a long slanted end, in the cool of the evening and leave in deep water overnight before arranging and use only mature flower heads as immature flowers will not develop further or keep well. Flowers also dry well and can be used for several months in this form. Flower heads left on the bush can also become quite attractive as they age, taking on many different colours from the original, making them useful for early winter indoor decoration when other flowers are scarce. Foliage colours well in autumn and early winter and remains until heavy frosts arrive.

Plant in protected semi-shaded areas away from the hot afternoon sun for best results. While plants will grow in full shade, this restricts flowering and the plants can become spindly. Hydrangeas need moisture in early years, but once established they will cope with less frequent watering. Leaves will droop in the heat but pick up overnight.

Pruning should be carried out in winter, and like roses they perform best on new growth. So where possible completely remove canes more than three years old from the base of the plant to encourage new buds to develop. Canes which flowered last season should be shortened to just above a set of plump double buds low down in the bush. From these buds come the next flower stems. Single buds low down in the bush are growth buds and pruning to these will produce a stem which ends in a flower bud. This may not flower until the next season, but forms the structure for the future. 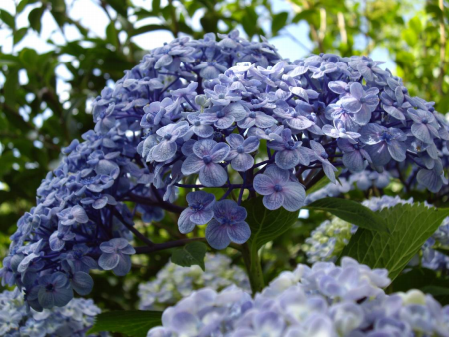 New firm canes which have not flowered should be left untouched if the terminal bud is in good condition, otherwise just tip prune these as they should produce early flowers while the new flower stems develop from lower down. Immature weak growth should be completely removed along with old leaf litter and snails from the base of the plant.

Dwarf cultivars (such as H. macrophyla ‘Pia’) flower on new flower stems from the base of the plant and then tend to die out, so all stems which have flowered should be completely removed. Finally, lightly cultivate the area, mulch and apply snail bait to protect new growth as it appears. Keep these plants moist at all times.

Hydrangeas make good tub or pot specimens for areas away from hot afternoon heat and wind. They can be taken indoors for short periods while in flower then returned outdoors. They may be propagated readily from softwood cuttings in early summer or hardwood cuttings when pruning in winter.

Many species and cultivars are available, some with tiny fertile flowers surrounded by, or interspersed with, larger sterile flowers with showy petal-like sepals. Others comprise almost entirely large sterile flowers. All of the following, except the second last, are deciduous.

SOME FAVOURITE SMALL PLANTS (THAT AREN’T WATER GUZZLERS).
May 3, 2019