SOMETHING TO BRIGHTEN A WINTER GARDEN 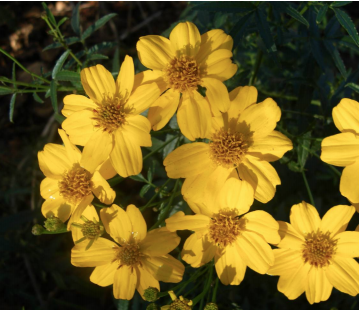 If you have never grown this marigold and you like a cheery garden in winter, then it’s time you searched for one of these. It’s a perennial which is well worth growing for the deliciously fragrant leaves, quite apart from the fact that it is at its best when the weather is at its coldest in Canberra. Why is that so, I wonder, when it comes from Mexico? Checking further, I know now that it grows naturally in mountain canyons between 1200 and 2400 metres above sea level in northern Mexico and southern Arizona.

It was discovered in the late 1800’s in south eastern Arizona by the Lemmons, husband and wife plant collectors, and their role is reflected in its species name.

In the same genus as garden marigolds, this shrubby winter-flowering plant is sometimes known as the mountain marigold. It has masses of small goldenyellow daisy flowers amidst ferny foliage. Its fragrance has been described as “ripe passionfruit, mint with a hint of camphor”. Whatever you think its fragrance might resemble, brush past the foliage of this plant and you will be sold on it. The lacy compound leaves are about 5-10 cm long with serrated leaflets. The flower heads are about 4cm across, with bright yellow-gold rays and darker yellow discs. It will form a sprawling mound of up to 1.2 metres high and 1.5 metres across.

It makes a brilliant companion for other hot-coloured winter flowering plants from Mexico, such as the glowing red salvia ‘Tequila’.

It prefers a well-drained soil and is very drought-tolerant, but be sure to keep your new plant well-watered until it is established. In its natural habitat it flowers during autumn and spring, usually being cut back by the effects of cold during the freezing winters of Arizona and northern Mexico. There it will regrow in spring, but here in Canberra, conditions are not quite so inhospitable and so it flowers in June, making it a most welcome addition to the winter garden.

Propagation: It can be propagated by cuttings which are very easy to root, or clumps can be divided in spring. You can also plant seed in spring.